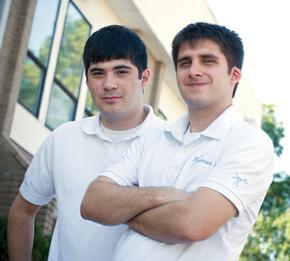 Immense Networks has been featured in this month’s Business Report magazine.

Before Immense Networks got its name from searching the dictionary and thesaurus and before it moved into a 600-square-foot office complete with coffee pot, water cooler and demotivational posters, there was the computer club meeting at Holy Cross School in New Orleans.

Back then, Darren Kattan was an eighth-grader who was in his second year at the Ninth Ward school. Figuring the computer club was some big thing in which everyone took part, he showed up for the meeting after seeing fliers around the school.

But one other person showed up: the club’s president, Bret Esquivel, another eighth-grader who had started at Holy Cross during the brief time when the school offered fourth grade.

“We didn’t know each other prior to that,” Kattan says. “Bret was from Chalmette. I was from the Westbank. Complete opposite sides of New Orleans. Had I not decided on a whim that I wanted to attend Holy Cross, we would never have met.”

Good thing, because their lives have been connected ever since—convincing their parents to haul their desktop computers completely across New Orleans so they could spend all night setting up, breaking and fixing them, arguing with the teacher in a Web design class over her network policies and how to circumvent them and, eventually, founding Immense Networks.

“The biggest barrier was that we were so young,” Esquivel says.

Esquivel and Kattan registered the domain name immense.net in 1999, four years before they graduated from high school and started at LSU. Using the words “big” and “enormous” as launching points for their search, they scoured the dictionary and thesaurus for an appropriate description, eventually landing on “immense.”

“Whatever we had, we wanted it to be bigger and better,” Kattan says. “We knew we wanted something to go with ‘networks.’ That was our niche,” Esquivel adds.

In January, Esquivel and Kattan leased an office on the second floor of a building on Brookline Avenue, helping legitimize the company since work was being conducted in a more professional setting than the apartment Esquivel and Kattan share off Brightside Lane.

“We have desks, we have it set up the way we want it,” Kattan says. “Everything is paid for. We both put in $100. We haven’t had to put in a dime since then. We drive past places every day, and we wonder how much they took out to get started. To know that everything is paid for, it feels good.”

» See the story on www.businessreport.com

Immense Networks ranks #2 in LSU One Hundred for 2012